Over the years the society has appeared at many different events from commemorations to air shows, from movie sets to corporate events. The society has travelled the length of the country from Whangarei to Wanaka in the course of entertaining and educating the public about World War II. 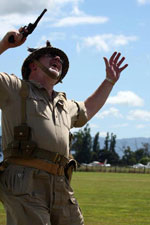 Our private collections of memorabilia items are set up to allow visitors to see and have their questions answered. Using our display items we have transformed many sites into places of bustling military activity.

Our society regularly participates in scripted mock battles for the public using blank ammunition, pyrotechnics, military vehicles and props. These events are oriented to give the public a good view of uniforms, equipment and fire power with the emphasis on entertainment. These displays are usually part of a larger public event and are usually based on campaigns rather than specific battles - they can be up to 20 minutes long.

A tactical takes the idea of a military exercise into a competitive combat between our various units using blank ammunition. Recently our society has developed a longer form which lasts 24 hours obliging troops to dig defensive positions, eat, sleep, fight and live in a foxhole, all the while responding to enemy attacks and launching their own. 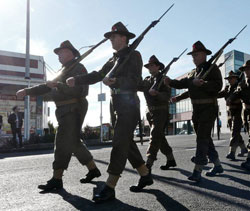 The society has been very proud to be associated with returned war veterans. Our Allied units have paraded at the Auckland Domain ANZAC dawn ceremony and also provided honour guards and firing parties in parades for Grey Lynn RSC, Avondale RSA, Piha RSA, Titirangi RSA, Pukekohe RSA and Blenheim RSA. The society has also been involved in the US Veterans Memorial day, VJ day parade and in a charter parade for the 3 Auck/North Territorial Army Regiment.

We organise formal and informal range shoots for our members, where an appointed range instructor insures every one is safe and has a fun shooting. 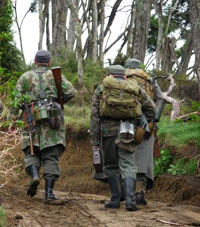 We have many private military museums that we are able to visit that have a great selection of weapons and vehicles, many of interest to our members.

We have made presentations to school groups, scouts and cadets. Been involved as extras, actors and advisors in feature films, TV shows, music videos and short films. Our members have been involved in product launches, theatre, gala openings and in advertising.

Our society not only trains to together but we have fun together too. Opportunities to socialise at society BBQ's, regimental dinners and sharing a drink with our supportive friends at the Grey Lynn RSC are a regular feature. We also discuss information and share ideas on our society facebook page.