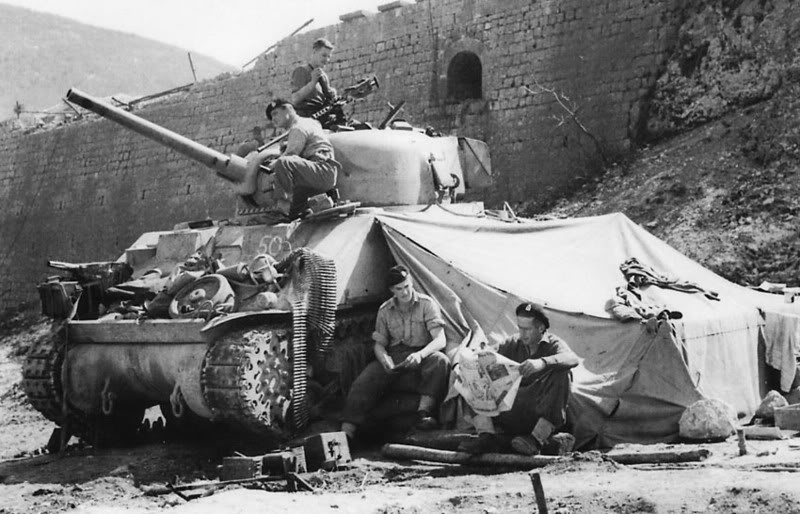 The 18th Battalion was formed in New Zealand in September 1939 and after a period of training, it embarked for the Middle East and then onto Greece in 1941 as part of the 2nd New Zealand Division. It participated in the Battles of Greece and later in Crete. Evacuated from Crete, it then fought in the North African Campaign and suffered heavy losses during Operation Crusader. Brought back up to strength, the battalion participated in the breakout of the 2nd New Zealand Division from Minqar Qaim in June 1942, where it had been encircled by the 21st Panzer Division. The following month, the battalion fought in the First Battle of El Alamein.

In October 1943, the battalion was converted to armour and designated 18th Armoured Regiment. To replace men lost at El Alamein, personnel were drawn from a tank brigade being formed in New Zealand. The regiment spent a year in Egypt training with Sherman tanks, before embarking for Italy in October 1943 to join up with the rest of the 2nd New Zealand Division. It participated in the Italian Campaign, fighting in actions at Orsogna and later at Cassino. The regiment finished the war in Trieste and remained there for several weeks until the large numbers of Yugoslav partisans also present in the city withdrew. Not required for service in the Pacific theatre of operations, the regiment was disestablished in late 1945.

The recent addition of the 18th Battalion, 4th Brigade to the Societies WW2 “Kiwi” re-enactment representation now allows us to enhance our overall 2 N.Z.E.F. offer.

The 18th Battalion during WW2 was initially an infantry battalion and in late 1943 became an armoured brigade – thus at shows we can now enhance the display of the 21st Infantry battalion with a display giving the public a “feel” for a WW2 Kiwi armoured unit. Uniforms, equipment and a soldiers personal weaponry for armoured units where as issued to infantry units although some variations where made specifically for those manning tanks – for example - like holsters and pistols being modified so as to not “catch” when climbing in and out of a hatch. As with all the Societies Unit - inter-unit co-operation is very important – not only within the Society – but wider re-enacting community.

We pride ourselves on authenticity and accuracy when representing those who wore our uniforms in WW2. Uniforms are worn with care and pride in honour of both servicemen and women who wore them during WW2.