Fallschirmjäger Regt. 3 was officially formed in August 1940, consisting of three Battalions. After eight months of intensive training the regiment was considered combat ready.

Crete was the scene of the largest German Airborne operation of the war, and the first time in history that an island had been taken by airborne assault.

On May 20th the first waves of paratroopers landed on their drop zones at Agya, southwest of Galatas in the face of resolute resistance by Commonwealth troops.

Yet the paratroopers held their positions. Late in the evening of May 23rd the paratroopers made contact with Geb.Jg.Regt.100 near Stalos and together they co-coordinated their counterattacks. With the air landing of the 5th Mountain Division, military success looked brighter for the paratroopers on Crete. On May 25th the heavily defended positions at Galatas were taken, and two days later paratroopers captured the city of Chania and raised the German flag over the harbour. Afterwards, Crete was dubbed the graveyard of the Fallschirmjäger, with 1032 officers and men killed, 1632 wounded and 1759 missing.

The paratroopers took up new battle positions on the Eastern Front positions on the Neva river near Kelkowo and Wyborgskaja. After weeks of extremely difficult fighting FJR.3 was relieved. It had succeeded in holding its positions but at a very high price. On November 15th 1941,only 120 paratroopers were in formation for an inspection by Oberst Heidrich, and one company had lost 130 men to injury, frostbite and death.

The survivors were happy to enjoy Christmas at home. Early in January 1942, FJR. 3 were again dispatched to the training ground at Gross Born, where it remained while training up the young replacements.

On June 23rd they were put on alert and all leave cancelled. Tropical clothing and equipment was issued however it soon became obvious to them, that there was not to be an airborne operation against Malta. The Battalion was assigned to Airborne Brigade Ramcke.

On August 12th the brigade was transported to the combat zone in the Western Desert facing the British 8th Army .Their positions were successfully held until November 2nd, when they were ordered to withdraw. The retreat was fought as a delaying action followed by a daring escape using captured British vehicles, marching, or hitching rides. During the following months the paratroopers were relieved and flown to Italy. Only a few members of Brigade Ramcke remained in Africa, and they fought their way back to Tunisia in small kampfgruppes.

The remainder of the unit regrouped and undertook garrison duties in France before orders arrived to travel to the Eastern Front again.

The paratroopers were again placed to hold a vital defensive line at Ribschewo and the Russian forces in that area were soon forced to give up any further offensive operations.

However 3rd Battalion was to reinforce FJR.4 which was under heavy attack near Lushli. It now appeared possible that the Red Army would break through; so 3rd Battalion was thrown into the fight to retake the hill. (March 20th – 27th 1943) Although the paratroopers were successful, their casualties were extremely high. 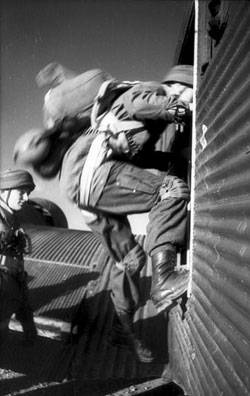 The paratroopers were dropped around Syracuse and Catania to counter the Allied assault of Sicily with a air and sea landings. The Fallschirmjägers immediately went to work preparing defensive positions, to meet the expected Allied advance. The MG Battalion was sent to defend the important Primasole iron road bridge over the River Simeto, which was the only road access through the mountainous areas in the east of the Island.

On the night of 12th & 13th July, men of the British 1st Parachute Brigade, jumped on Catania to capture the airfield. This action coincided with a British seaborne assault on the coast further south. German forces managed to contain them and within a few hours had beaten down the resistance inflicting heavy casualties on the Red Berets.

Overnight on the 14th /15th July, 200 British Paratroopers jumped on to the southern side of the Primasole bridge with the aim of capturing it by surprise. The British Paras got there first and removed most of the demolition charges. The Fallschirmjäger made repeated attacks on the bridge and the British Paratroops were forced to withdraw after running low on ammunition.

The next day the British forces attacked several times accompanied by newly arrived tanks and infantry, supported by armour, they were beaten back with anti-tank weapons and concentrated MG and mortar fire. The British forces withdrew after taking heavy casualties. Before long they started to call down artillery on the Paras positions, destroying the 88mm gun and inflicting heavy casualties, especially on the Engineer Kompanies. Each side captured and lost the bridge over the next few days.

The German High Command gave the order to evacuate the island, under Operation "Lehrgang". The Fallschirmjägers were used to plug the gaps in the weakly held German line as the Axis troops were ferried to mainland Italy.

The Fallschirmjägers were thrown in to battle stop the new landings by the Allied forces. The1st Battalion did their very best by taking their objectives and then prepared with armoured forces to split the Salerno beachhead and drive the Americans back into the sea. But by now the allies were too strong and well supported by firepower.

On December 4th the British and Canadians attacked and threatened to take the town of Ortona and punch their way through the "Gustav Line". There were no German troops available to stop the Allies as they approached. At this critical moment Oberst Heilmann was ordered to counterattack as quickly as possible. The 2nd Battalion rushed toward Ortona and did took the town. On December 17th, 1st Battalion, then the entire 1st Division reinforced them. During the next few days the paratroopers were thrown into one of the fiercest battles of their existence as the Allied threw tanks, artillery, aircraft and infantry at them.

By February 10th the 1st Parachute Division was responsible for the defence of the Cassino hills and assumed the position held by the 90th Infantry Division. The troops of the 3rd Battalion, FJR.3 who had survived the bitter battles were sent to the rear of FJR.1, in reserve south of hill 593. From this point the paratroopers saw the bombardment of the Cassino monastery on February 15th After the devastating bombing of the monastery FJR.1 crawled into the ruins and set up defensive positions. The 1st Battalion of FJR.3 occupied monastery hill, the 2nd Battalion was responsible for the city of Cassino, and the 3rd Battalion was put in reserve at Fontana Liri as they had so few as 70 paratroopers available. By February 26th, the Germans finished their reorganisation and prepared for the next battle. At this time the 1st Battalion was 150men strong, the 2nd had 180 and the regiment units 13 to 15, including the staff had about 300.

On March 15th 1944, the Allies launched their second offensive (March 15th to 23rd) with a massive air attack. The Germans dug themselves out of the rubble and organised well-defended strongpoint. The battle for the city of Cassino became a battle of close combat from bunkers, houses and cellars as the Allies poured in more tanks and infantry into the maze of rubble. The Germans held.

On May 11th, 1944 the Allies opening the third battle for Cassino. Again the centre of the attack was hill 593. The paratroopers launched fanatical counter-attacks in an attempt to throw the 2nd Polish Corp off the monastery hill. After several attempts on the evening of May 12th hill 593, was again in German hands. But else where the Allies had broken through, now the Germans at Cassino were forced to retreat or be encircled.

After pulling out of the Cassino positions FJR.3 and the entire 1st Parachute Division had to once again withdraw now that the Allies were beginning their drive towards Rome.

After successful defensive battles the Fallschirmjägers were moved to the Adriatic coast, near Pesaro and a series of delaying stands were made by the division.

In the early months of 1945 no large-scale battles occurred in the area. During this late phase of the war, Italian partisans became much more active and presented a constant danger in the rear areas. FJR.3 was forced to cross the Po River in an uncoordinated move and often troops escaped the American forces by swimming the river without their heavy weapons. The river could no longer be defended. On May 22nd ,1945 the paratroopers were ordered to honour the unconditional surrender and were at first surprised at the fair treatment afforded to them by the Americans. Those who survived the war will never forget his motto: "Treue um treue."

(10 commandments of the Fallschirmjäger)